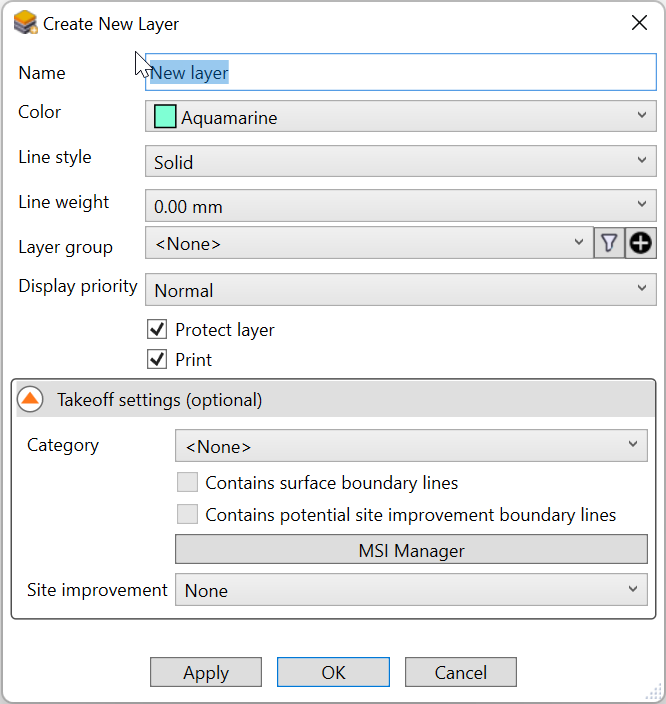 Name:
Enter the name for the new layer. We recommend using names like ROAD - Curb Flow Line so that all ROAD features are grouped together alphabetically in the layer manager etc. By using well defined layer name prefix values, you can rapidly reduce layer lists presented using the layer list filter controls in all RPS commands.

Color:
Select the default Color for the new layer. This will be applied to all objects that have their color set to “By Layer”.

Line style:
Select the default Linestyle for the new layer. This will be applied to all objects that have their linestyle set to “ByLayer”.

Line weight:
Select the default Lineweight for the new layer. This will be applied to all objects that have their lineweight set to “ByLayer”.

Layer group:
Select the Layer group for the layer. If you need to create a new layer group, you can do so here by clicking the

Click OK to complete the process and create the Layer group.

Click Cancel to abort the process and not create a new Layer group.

.
You can further filter the layer group list using the case sensitivity button

Usage Tip:
We recommend that Layer groups be named e.g. 00 - EXISTING or 01 - FINISHED GRADE etc. so that they are sorted alphabetically in the View Filter Manager according to your work process, thereby placing the 00 - at the top of the list and 99 - at the base of the list.

Protect layer checkbox:
Check this checkbox to add layer protection to the new layer. This will stop it from being deleted if you have no data on it and you ever select to “Delete empty layers” (e.g. in Project Cleanup or in Layer Manager commands). By protecting a layer you also add it to the layers presented in the Standardize layers or Map layers commands.

Takeoff settings (Optional):
If you are using TBC with the Takeoff workflows, then as you create the layers you can also assign the required Takeoff attributes at the time of new layer creation.

Contains surface boundary lines checkbox:
Check this checkbox if the new layer will hold linework that will be used to form a surface boundary around the objects assigned to the same takeoff category (Original or Design). The line(s) placed on this layer can be 2D or 3D lines, will need to be closed lines and can be formed using e.g. the Shrink Wrap command.

Usage Tips:
We recommend that you create a keyboard shortcut using CTRL N for this command so that you can access it quickly from anywhere within Trimble Business Center

Apply
When you tap apply, the new layer is created and the command will ready itself to create a further new layer set and repeat process execution. If you do not want to create another layer and repeat the process tap Close to finish the process. You can create as many New Layers as you need from a single execution of this command.

OK
When you tap OK the layer is created and the command closes with no further execution.