Provides a rapid way to mass convert polyline and CAD line objects into linestring objects. In addition the command provides an easy way to eliminate UCS (User Defined Coordinate Systems) from imported CAD objects or from objects created using the Cutting Plane View in TBC. This increases your productivity and eliminates a large bottleneck in the processing of CAD data and point clouds

The Convert to Linestring command dialog looks as follows 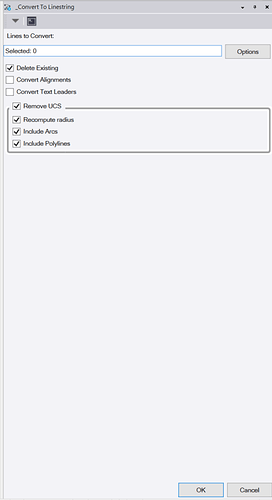 Lines to Convert:
Select all of the CAD lines (CAD Lines, Polylines, 3D Polylines etc.) that you wish to convert to TBC Linestring objects and or remove UCS properties from.

Delete Existing checkbox:
When checked, the source lines will be deleted once they have been converted into TBC linestrings.

Convert Alignments checkbox:
When checked, imported or hand entered alignments that have been selected can be converted to linestrings. Uncheck this checkbox if you do not want to convert alignments. Note that Arcs and symmetrical vertical curves in the source alignment can be matched to a linestring, however spirals, asymmetrical vertical curves and vertical arcs do not match with linestring object properties and require chording to approximate. Note also that linestrings d not have a Station or Station Equation or Superelevation property so those elements of an alignment will be lost on conversion.

Convert Text Leaders checkbox:
When checked, text leader lines will also be converted to linestrings. it is common to not want to do this as text leaders are links between a text object and the location to which the text is referenced (TBC Smart Text), however sometimes it may be useful to carry out this process on imported CAD data.

Recompute radius checkbox:
A UCS (User Defined Coordinate System) is used by AutoCAD and Microstation to accommodate for the fact that they have no easy way to create curvilinear geometry in 3D within their CAD solutions. In TBC a linestring can include Arcs and Vertical Curves, and can also include any number of VPIs that define the 3D path of the line. In CAD systems, they can represent the curvilinear line in 2D only, so to create a 3D curvilinear segment they apply a UCS to the segment (typically arcs) so that it is drawn on a 3D plane. In addition when they tilt the arc using a plane, they often change the radius slightly so that it continues to fit the segments at either end of the arc. When we adjust out the UCS to return the lines to TBC linestrings without the UCS, we should recompute the radius to take out the arc adjustments applied by the CAD system. Check this checkbox in most situations.

Include Arcs checkbox:
Check this checkbox if you want to remove UCS properties from Arc segments of lines

Include Polylines checkbox:
Check this checkbox if you want to remove UCS properties from Polylines and 3D Polylines.