Provides the ability to place a block or blocks automatically on a selection of points and orientate them in relation to a selected line or alignment. Great for placing sound wall or guard rail posts and footings along their feature lines. Blocks get rotated into the correct orientation along curves and at angle corners. Enables the rapid creation of layout data for anchor bolts and 3D visual elements for the SiteVision Augmented Reality system etc. 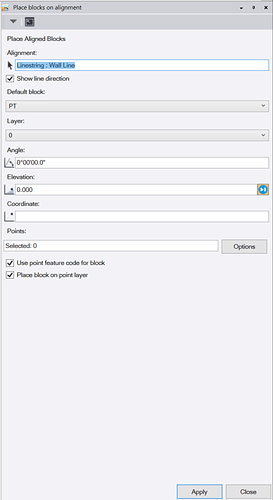 Alignment:
Select the Alignment or Line to which you want the placed blocks to be aligned. The line can be curvilinear or simple linear segments with non tangential nodes. Blocks will be placed parallel to, perpendicular to or at any defined angle to the alignment at the placement locations. At angular corners, blocks placed at the angle point exactly will be oriented to the “half angle” of the corner.

Default block:
Select a Block from the projects Block list to act as the default in the event that the selected point names do not exactly match an available block name. Blocks are placed on points using a name match process i.e. if the Point Name = Shaft and a Block named Shaft is available, it will be placed on all points of that name. If a name match is not found, then the default block will be placed on the points.

Layer:
The layer selected from the presented layer list will be used by default for the blocks / default block being placed on the points. You can override this by later checking the Place block on point layer checkbox (see below).

Angle:
This is the additional rotation that you may wish to apply to the placed blocks in order to skew a block in relation to the selected line or alignment. For example you could enter 90 degrees to place the block perpendicular to the line, or 45 degrees to place it at a 45 degree angle to the line (or computed orientation). By default a direction of 0 degrees in the block is placed parallel with the line at the selected location. If you are placing a number of different blocks in one process, you may need to define your blocks with typically a 0 degree or 90 degree orientation e.g. if an anchor bolt plate has a long axis and short axis, and the long axis is perpendicular to the selected line or alignment, then draw the short axis in the block at the 0 degree orientation and the long axis of the block at the 90 degree orientation. In this field you can then set the angle value to be 0°00’00.0" degrees

Elevation:
The Blocks will be placed at the computed elevation either at the placement location on the line (if the line is a 3D line) or at the point location if being placed on a point object. If neither the line or the point has an elevation, then the default elevation entered here will be utilized.

Coordinate:
When placing the blocks, you can use snap modes like Free, Nearest, End Point, Mid Point etc. to place the blocks wherever you feel that you need them, the locations station along the line is computed, the orientation determined and then applied as a rotation value on the block as it s placed. If placing blocks manually one by one, then use the coordinate field to place the blocks at the desired location.

Points:
The alternative to manual placement is to place the blocks at point locations. When placed on points, the name of the point is compared to the blocks that are available in the project, if a name match is found (Point Name and Block Name are a match) then the matched block will be placed on the point location using the X,Y,Z values of the point for its insertion point. All blocks are placed at unit size in X,Y and Z axes. If a name match is not found then the default block will be placed at the points location. The block will be placed either on the Layer defined earlier, or on the points layer if the Place block on point layer checkbox (see below) is checked. You can select any number of points with any number of feature codes on which to place blocks in one command. For example if you have a sound wall to build, and at each post location you require the following objects to be created

Then you can compute the 5 point locations accounting for variable Drilled Shaft depths and variable Post heights, name the 5 points differently and then place 5 named blocks on the 5 named points for all post locations on a project in one command execution (See the demonstration video below for this example)

Use point feature code for block checkbox:
When checked, the command will utilize the Point Feature Code as the basis for selecting the block to be placed on the points location (name match). When unchecked, the default block will be placed on all point objects selected.

Apply
When you tap apply, the blocks will be placed and the command will ready itself for another selection set and repeat process execution. If you do not want to make a second selection and repeat the process tap Close to finish the process.