Not sure if the command is malfunctioning or I’m having a major brain fart and botching an otherwise seemingly straight forward command. (I stopped and updated the command upon the initial click when the noticed popped up)

Tried a whole bunch of different methods of entry and snapping methods all resulting in unexpected outcomes. I’m simply trying to do a single row, 52 column array of a 10’ linestring (highlighted), spaced 12’ apart, along a curb alignment that has an azimuth 88d51’06". As you see in the clip that’s exactly what’s entered. I tried the From and To point as the same point and the From and To point at the bearing and distance apart mentioned above.

As I need this out now, I am going to make the array manually, however, please advise on what I am doing incorrectly or provide an updated command. Thanks. 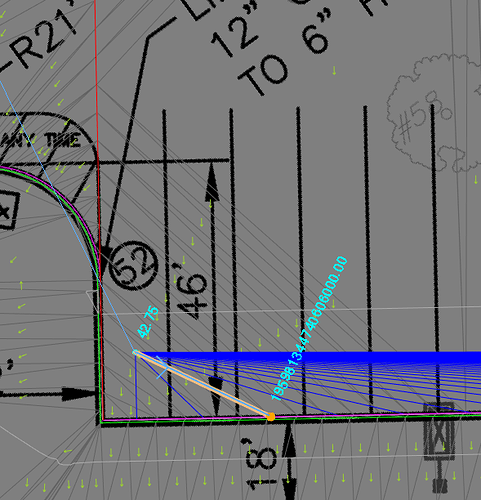 The issue is your Vertical Angle (and us setting a stupid default) - the Vertical Angle by default should be H0 or Z90 not Z0 which is vertical - so a 12 foot spacing horizontally on a vertical angle of 0 is a long way as you have found - I will get the default set to H0 or Z90 so that the columns are Horizontal by default.

D’oh… I knew it was probably something silly. I looked at those fields and they checked for some reason… like I said… brain fart.

This is fixed now and all working well

Thanks for letting me know Richard