Explodes a selected TIN surface model into 3D lines and points. The explode process eliminates duplicate lines. The exploded surface can then be edited to remove erroneous data e.g. erroneous triangle sides or to be combined with other data to create a new surface model. The command also allows triangle sides that have a break angle (between adjacent triangles along the side) greater than a specified angle to be formed. This provides the ability to “reverse engineer” linework from the TIN model. 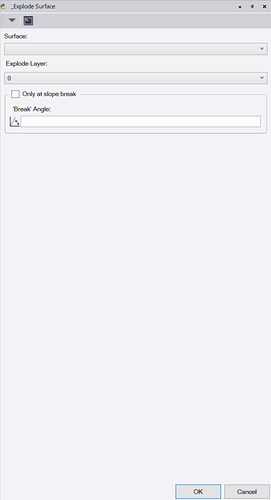 Surface:
Select the surface model that you wish to explode

Explode Layer:
Select the layer onto which you want to place the exploded data (Points and Lines)

Only at Slope Break checkbox:
Check the checkbox if you want to only create lines from the exploded surface where the lines form a crease between two triangles that have a slope difference of greater than a defined 'Break Angle" (see below).

This can be used for example to find breaklines from a TIN surface that follow changes of slope greater than the specified angle. This will find e.g. Flow Lines, Top Face of Curb, Surface Breaklines depending on the Break Angle that you define. It can take a bit of trial and error before you find the appropriate break angle depending on the source surface and what specifically you are trying to extract. You may also need to use different Break Angles and Target Layer selection combinations to extract different types of feature from the surface model. Curb and Gutter for example would often be at an angle of 40 degrees or higher. Retaining Walls could be a break angle of 80 degrees or higher.

You will find that relatively small Break Angles of 1 or 2 degrees will separate out a lot of data in a surface model.

The following video shows how to utilize the Explode Surface command