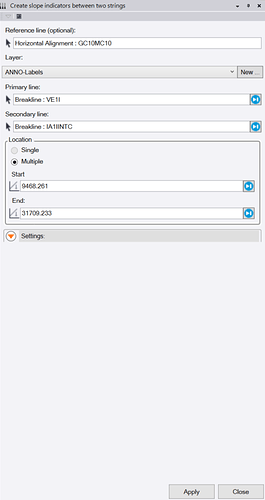 The Settings area of the command dialog looks like this and can be expanded / collapsed using the small orange arrow control. The Settings area will soon be removed and placed in the RPS Settings command, so that you can create your preferred settings and store them so that they can be used between projects. Once you have defined your preferred style of working, the settings will only be accessed occasionally. 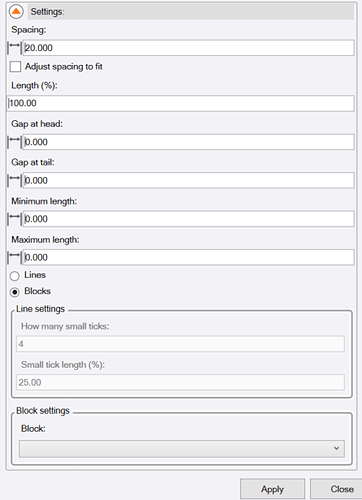 You can also select the same reference line as the primary or secondary line if required. The reference line when selected defines the orientation and spacing of the slope indicators.

When no reference line is selected, the orientation for the slope indicators is derived from a central line computed between the primary and secondary lines

Layer:
Select the layer on which you wish to place the slope indicators. You can create a new layer and layer group if required by clicking the [New …] button. 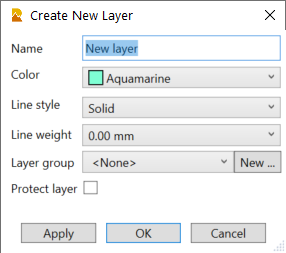 Primary line:
Select the first of two lines that will represent the top or toe of the slope that you want to place the slope indicators on. The slope indicators work out which line (Primary or Secondary) is the Top and Bottom of slope and orientate themselves automatically.

Note that the primary line, secondary line, start and end location selectors have Auto Advance “sticky” buttons at the right hand end of the selectors. The command will automatically loop the following selection sequence unless these buttons are clicked / enabled (orange) (vs blue disabled).

These sticky buttons allow you to control the loop sequence. You can enable any combination of the auto advance buttons to suit the selections that you need to make.

For example if the primary line is the edge of pavement string for a long highway project and it goes on for several kilometers, if you want to do all that side of the road first, then you can enable the auto advance on the primary line so that you can then just select Secondary line, Start and End locations.

Secondary line:
Select the second of two lines that will represent the top or toe of the slope that you want to place the slope indicators on. The slope indicators work out which line (Primary or Secondary) is the Top and Bottom of slope and orientate themselves automatically.

The single placement method allows you to drop single slope indicators (block method only) where you want to add additional indicators, or where you have a short length of slope that does not work well with the multiple method of placement.

Usage Tips:
While snapping to the ends of the primary or secondary line is “the most obvious thing to do”, sometimes using near snap to snap inside the start and end locations for the line can sometimes produce better results.

Once you have selected the Start location, you will see a dynamic cursor that updates as you move the cursor, this provides a live preview of the end result. The preview uses a generic internal symbol to show you the pattern that you are creating (block or line). Your selected block or line pattern will be placed when you click the apply button. Where the primary and secondary line range is extremely long, the command optimizes the display to reduce lag by drawing fewer indicators in the mid section of the selected range.

The settings control the sizing, placement patterns and symbols to use in the slope indicators. You can place lines only or blocks to indicate the slopes on a surface.

Spacing:
The slope indicators are either

Input the spacing in project units that you require between the major indicators (the long lines or block objects).

Adjust spacing to fit checkbox:
When checked, the spacing between the major and minor ticks will be adjusted to create an equal spacing between the indicators to accommodate the fact that the length of line being annotated is not an equal multiple of the spacings selected. This will result in a major slope indicator being placed at the selected start / end location or where the first indicators should be drawn based on the settings defined (min, max lengths etc.) 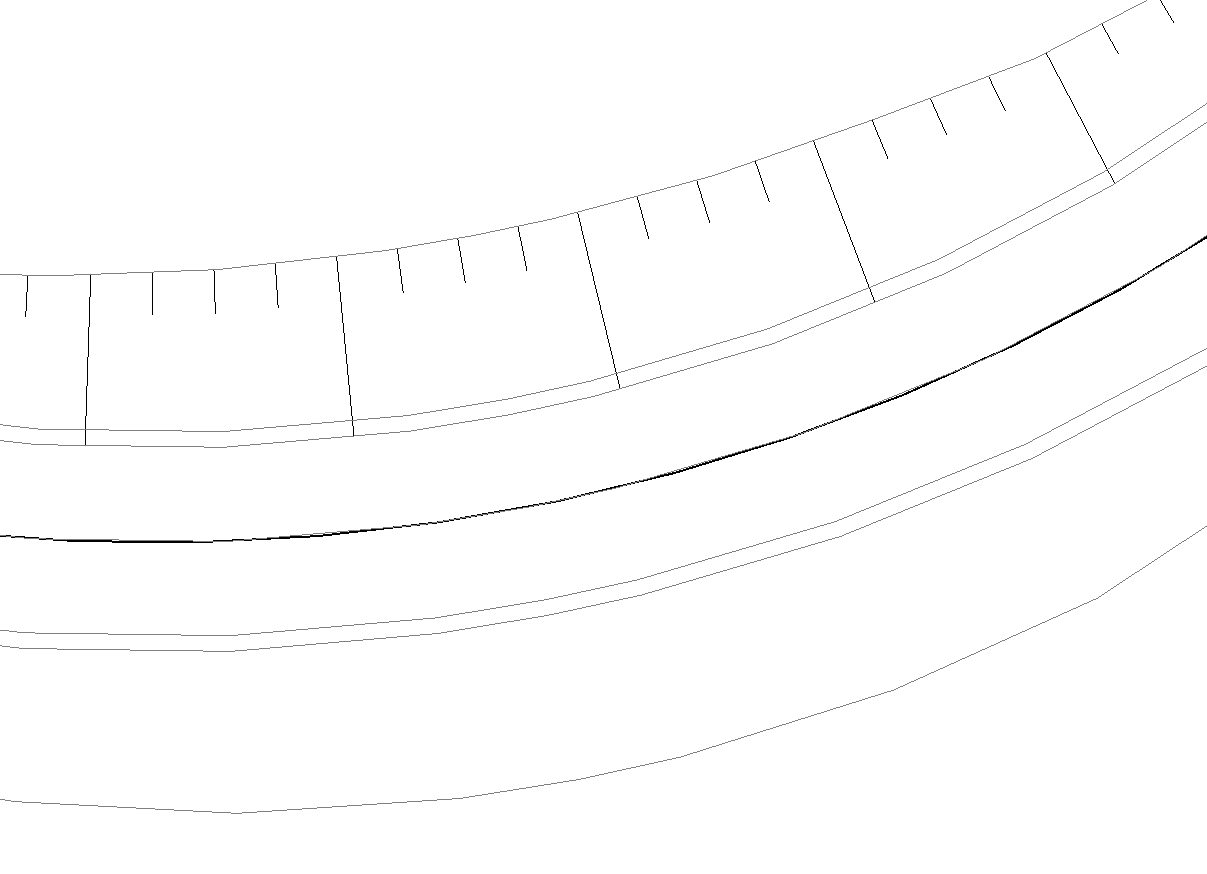 Lines or Blocks Selection:
Select whether you want to place the line type or block type slope indicators. If you select Blocks the line settings are disabled and you can select the Block settings only. If you select Lines then the Block settings are disabled and you can enter the line settings only. The line method by default will always create 3D lines. The Block method will create either 2D or 3D block placements, depending on the block definition selected. The method to define 3D blocks is provided below along with some sample 3D blocks that you can use in the absence of your own definitions. 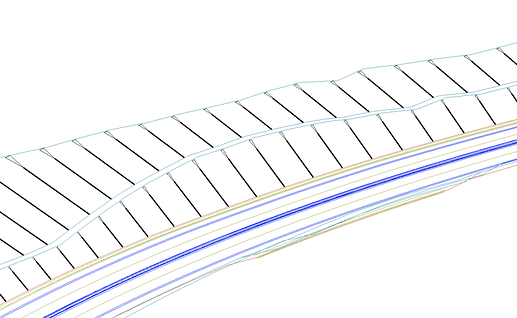 Small tick length (%):
Enter the % of the slope length that you want the minor indicators to be e.g. 25% of the distance between the primary and secondary lines

Block:
You can use the slope line method as displayed in the image above, or you can replace the slope lines with slope indicator blocks or what are more commonly known as “tadpoles” or “hachures” that have a head and a tail that indicate the slope between the two lines. You can select the block that you wish to use as the indicator here. The block should be defined using a length of 1 unit (meter or foot), and should have its insertion point at the tip of the head and should use the two point definition where point 2 is defined at the tip of the tail. If you wish the blocks to be drawn in 3D (so that they fall on the slope) vs 2D (horizontal at the elevation of the Top of the slope) you need to define the blocks for 3D use (see the Example Files section below).

Preview Mode:
The command automatically provides a preview of the result that will be achieved on clicking Apply (only when you define the Start and End location). The preview will interactively update in line with settings changes that you make. When you like the result that you have defined, click Apply to commit the slope indicators to the project.

Apply
When you tap Apply, the blocks / Slope indicator lines will be placed and the command will loop so that it is ready for another selection set and repeat process execution. If you do not want to make a second selection and repeat the process tap Close to finish the process. 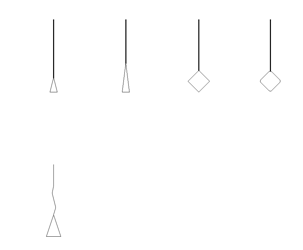 Import the DWG into your TBC project, the blocks will create instances of themselves at around 0,0. You can delete the instances and the Blocks will still be available for use in the project. Save them in your Project Template master so that you have them when you need them.

The block linework was drawn initially at Elevation 0 but then we use the Change Elevation command to drape them on a surface that is an inclined plane where the tip / center of the head (the insertion point i.e. location 1) of each tadpole is at elevation 0 and the tip of the tail (the orientation point i.e. Location 2 is at elevation 1), placing the Tadpole definitions on a 45 degree slope. You can define your own Tadpole Blocks using the same method. Once you have defined the linework, use the Create Block to make a block out of the linework, using the 2 point method.

Once defined if you want to keep a copy of the Block outside of your projects, use the Insert Block command to create an instance of the block(s) and then select the block(s) and export them to a DWG file in a folder on your computer. To use the block(s) in any project, simply import the DWG file into the project and delete the block instances, and you will have the block references to work with.