Creates a formatted Excel Spreadsheet report from measured 3D points aligned to specified station intervals against a line or alignment, sorted from Left to Right across the alignment where each column of data is a specified code and the value presented is the Delta Elevation between the measured point and the referenced surface elevation. Command reports at uniform intervals within a specified tolerance and color codes the cells of the report based on their In, Near, Out (High or Low) of tolerance status.

The video below is a quick demonstration of the command in use. For detailed help please refer to the video at the base of the help documentation.

The Corridor As Built Report command dialog looks as follows

Alignment:
Select the alignment, linestring, polyline or CAD line to provide the stationing for the report.

Surface:
Select the surface to provide the design elevations for the point comparisons to be made against.

Points:
Select the points that you wish to report

Interval:
Set the reporting interval at which you want to report the point data e.g. 50’

Start:
Manually enter or graphically select a Start Station value for the report. It is helpful here to turn on the Show Direction indicator for the selected alignment / line so that you can see the direction of increasing station.

End:
Manually enter or graphically select an End Station value for the report. It is helpful here to turn on the Show Direction indicator for the selected alignment / line so that you can see the direction of increasing station.

If you uncheck the checkbox, the out of tolerance points will not be reported to the excel report. At the end of the report generation process, you will see a text message within the command dialog that advises you which points did not report for this reason, along with the computed data for those points.

If you check the checkbox, the out of tolerance points will still be reported, however they will be reported at their specific station on a line of their own in the report.

For example while walking the As Built sections, you want to also pick up Manhole Rim elevations or Signal Triggers or Signage in / around the pavement area. It is highly likely that these points will not be at your interval stations, but you still want to report the points. Check the checkbox to report these additional points. Uncheck the checkbox to suppress these points in the As Built Report.

Elevation Adjustment:
If your surface model is a Finished Grade model and you are doing the As Built Report on a subgrade surface which is at a vertical offset from the selected surface, you can enter a “dial down” or “dial up” value for the reporting. The points elevation is compared to the surface elevation +/- the adjustment at the surveyed point location. The point is not moved, however the reported values are pulled onto the nearest station interval provided the measured point is within the station tolerance. 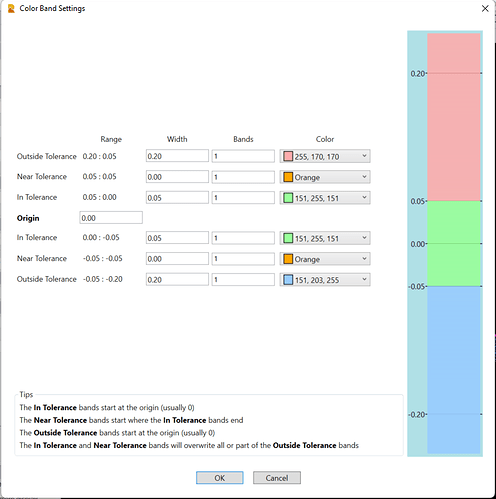 Notes:
If you are going to print the reports that you generate, and you are using a black and white printer, we recommend using light shades of color to make the reports more readable. Black text on a dark colored background is hard to read on printouts. If your reports are going to be PDFs then the color you choose is less important but can still be an issue.

If you do not want to color the cells in the output report, set all the color band colors to White.

Edit report columns button:
The report generator will analyze all of the points in terms of converting them into Station, Offset, Elevation values. The points are then grouped into Stations using the Interval setting and the tolerance value that you define for stationing. Within each station group, the points are then sorted in left to right order across the alignment. The codes at each station may vary, and the report function will do it’s best to compute the correct order of the point codes based on the data selected. It is inevitable however that field staff may miscode a point, and also that in some situations, the correct order of points may be ambiguous, in which case you can use your own judgement and reorder the codes based on what you believe to be the correct order. To reorder the code sequence, or to not report selected codes, click the Edit report columns button.

When the above dialog opens, all of the selected point codes that fall within the provided parameters are listed on the left side in the Reported codes area.

Use the Right arrow button to move a code from Reported to the Non reported area. This will remove these points from the report that is generated.

Use the Left arrow button to move a code from Non reported to the Reported area. This will add these points to the report that is generated.

Use the Up arrow to move a selected code in the Reported codes area up the sequence of codes to be reported. This will result in the Excel report placing that code in a column to the left of its original location.

Use the Down arrow to move a selected code in the Reported codes area down the sequence of codes to be reported. This will result in the Excel report placing that code in a column to the right of its original location.

Cancel:
Click Cancel to close the dialog and not save the changes made

Apply
When you tap apply, the report will be generated and opened in Excel.

On completion of the report generation, you will find a brief summary of the results in the command message area.

In the header area of the command you will find additional commands that you may find useful while using this command. When you select a header command, it will run leaving the current command open in background. When you are finished with the secondary command and either close it or use the toggle arrow in the header to switch between open commands, you will be returned to this command where you left off.

At any time while running the command press the F1 key to access this help document and training video.

At the base of most RPS commands, you will find command tips that you may find helpful. These tips point out things that you may need to be aware of or provide tips on command dialog shortcuts that may be available.