Copies a layer group and all the layers (that have members) into a new layer group where the group and each layer is named using the existing name with an added prefix or suffix.

This command is useful when you need to make a copy of existing data so that you can model an alternative scenario without adversely affecting the source data e.g. an alternative or new revision road layout or profile change for a subdivision or parking area for example. 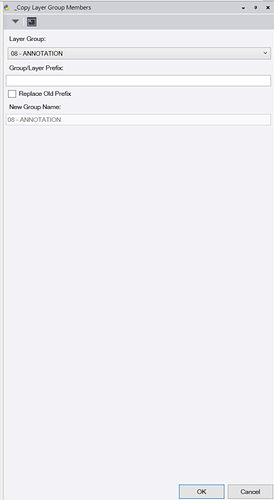 Layer Group:
Select the Layer Group that you wish to make a copy of. The command assumes that the data that you want to copy into a new layer group with revised layer names all resides within a single layer group.

Group/Layer Prefix:
Enter the prefix that you want to add to the existing Layer Group and Layers as you make the copy. For example if you have a layer group called ROAD FEATURES and you want to use a prefix V2- to create V2-ROAD FEATURES then enter V2- here.

Replace Old Prefix checkbox:
If you want to replace an existing prefix with a new prefix, you can check this checkbox. The replacement is done on a character by character basis, i.e. if you have a Layer Group named
03 - ROAD FEATURE and enter a prefix 03A you will end up with a Group Name of
03A- ROAD FEATURE (note the spaces either side of the hyphen).

Note that the replacement applies to both the Layer Group and the Layer Names which may or may not be desirable.

The dialog displays the outcome for the Group Name in the New Group Name field.

OK
Executes the command, copies the Layer Group and the Layers that contain data items only, and closes on completion