Provides the ability to create points for stakeout on lines and alignments at intervals, extra stations, key locations, high and low points, radius points and more

The command can also be used to create points for reporting purposes from measured linework at specific station locations in relation to a selected reference line or alignment. You can then label those points using the RPS Label Points command and generate output files in CSV format as required for data deliverables. 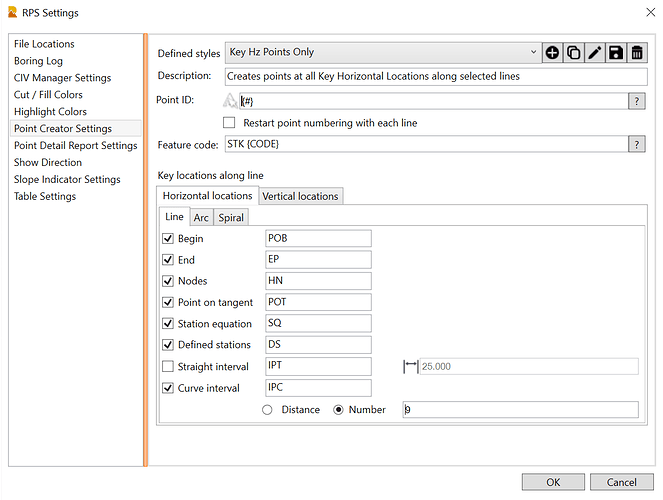 in the header row of the command that will also take you to the same location. 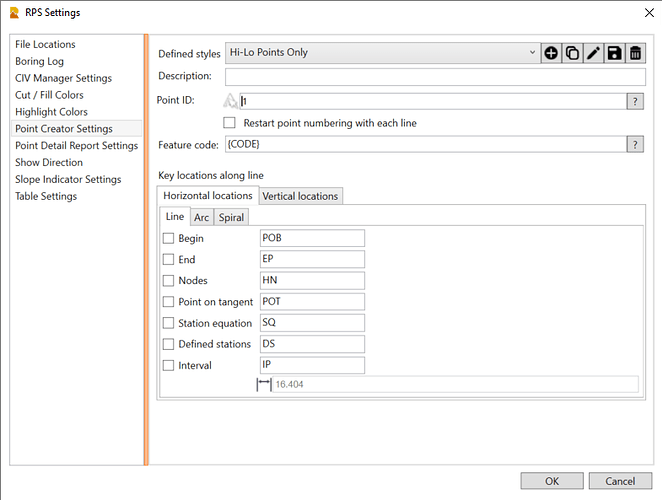 The settings for the point creator tool are stored in the RPS Settings folder as defined by the File locations setting. The settings are stored outside the project so that once defined they can be used inside any project thereafter.

Defined styles:
The defined style defines the points that will be created from a wide selection of options. you can create as many styles as you may require, each with different selections of points and intervals as well as naming conventions.

button and then enter the style name in the following dialog

To Edit the name of an existing style, click the

and edit the name of the style in the following dialog

To Save updates or changes to a style, click the

Description:
Enter a description for the style for additional detail beyond the style name.

button in the dialog for more details. The codes shown below should all be in upper case letters.

{NAME} will include the name of the source line for the points i.e. a line called CB will use CB for all of the points on that line. You can use a code set like {#} {NAME} to create Point IDs like 1 CB.

{CODE} will include the key location coding defined below for the point types being created e.g. RP for Radius Point or IP for Interval Point and so on. You can use a code set like {#} {CODE} to create Point IDs like 1 RP.

Restart point numbering with each line checkbox:
Check this checkbox if you wish to reset the Point number to the starting value for each line that you create points for - checking this allows you to number the points along each line in the same way starting from the same value.

Feature code:
You can define the Feature code that will be used for each point created. We recommend that you use one of the following or a combination of the following. Note that we automatically write the source line name into the Description 1 attribute for the points created and the station along the line or the station from the selected reference line or alignment into the Description 2 attribute. Use the key location code {CODE} with or without a Prefix like STK {CODE} for Stakeout Points or CHK {CODE} for As Built Check points etc.

{CODE} to add the key location code for the point e.g. RP for Radius Point or IP for Interval Point etc.

{NAME} to add the name of the source line used to derive the point e.g. CB

{STA} to add the station of the point in relation to the selected reference line or alignment.

Key locations along line:
The point creator tool creates points along selected lines and alignments for both horizontal control and vertical control locations for all elements of the lines including straight / tangent, spirals, arcs, vertical arcs and vertical curves. It also creates points at intervals along the line or at stations along the selected reference line and also the High or Low inflection points of the selected lines. You can select any combination of key location types within a style and define intervals as required for that style. For each key location you can enter a code value which is picked up by the {CODE} field in the settings described earlier.

Select lines:
Select the lines along which you wish to create points. Lines can be Polylines, 3D Polylines, CAD Lines, Linestrings, Circles, Rectangles, Polygons and Boundaries. Note that lines containing objects with a UCS (User Coordinate System) should be converted to normal linestrings using the Convert to linestring command prior to running this command. 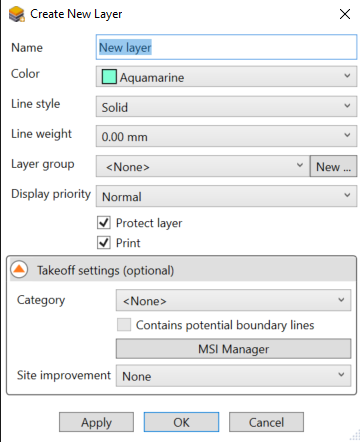 Name:
Enter the name for the new layer

Color:
Select the color for the new layer (this becomes the ByLayer color for objects placed on the layer).

Layer group:
Select the layer group for the new layer. Leave it as if you do not wish to place the layer in a layer group. If you wish to create a new layer group, click the New button adjacent to the Layer group control.

Display priority:
Select the display priority for the objects being created on the layer being defined. Select from Normal, Background or Foreground. Normal is between Background and Foreground. This affects the way that elements are displayed and printed to PDF / a printer by TBC. Foreground objects of the same type will print on top of Normal objects and Normal objects will print on top of Background objects. If different types of objects are on the same layer then the object based hierarchy for display and print priority prevail. The object based hierarchy from background to foreground is as follows

Protect layer checkbox:
Check the checkbox if you wish to protect the layer being created from deletion when empty.

Print checkbox:
Uncheck the checkbox if you do not want the objects placed on this layer to be printed to PDF or Printers.

Contains potential boundary lines checkbox:
Once you have categorized the layer, you can elect to check this checkbox. By doing so, you are telling the Takeoff processor, that this layer contains lines that can be used to bound areas that can be used to assign Site Improvements i.e. if the layer contains finished grade building pads and you want to assign a site improvement that has 12" concrete and 6" rock within it for subgrade adjustments and concrete and rock quantities then add this layer to Category Design and check this checkbox.

MSI Manager button:
If you need to create materials and or site improvements from the materials so that you can use them here as you create the new layer, click this button to open the MSI Manager.

Apply:
Click Apply if you wish to save the new layer settings and create a second or subsequent new layer.

Cancel:
Click Cancel if you wish to close the New Layer control without saving the most recent changes.

Apply
When you tap apply, the points will be created and the command will ready itself for another selection set and repeat process execution. If you do not want to make a second selection and repeat the process tap Close to finish the process.

The following video shows how to utilize the Point Creator command